We are happy to announce that we have received a $60,000 grant from the Loudoun Economic Development Authority that was approved by a unanimous vote of the Loudoun Board of Supervisors this past Tuesday, September 20.  This is an amazing show of support for what our Co-op is bringing to our community–a community owned grocery cooperative focusing on locally grown produce, meats and other products.  Having a locally owned grocery store means that more money stays in our community through purchases from our local producers and vendors; providing more local employment; and catering to the interests and needs of our community. The LCM Board has worked tirelessly to make the case to our Board of Supervisors about the importance of the Co-op and benefits to western Loudoun County.  It is an exciting time as we continue moving forward to opening in Spring 2023.  Thank you to everyone who has supported us through your memberships and member loans!

During the month of November 2021, we are donating 25% of each new Co-op membership to the non-profit, Rallye for Veterans!  This very worthwhile local organization provides direct financial assistance for medical care, mortgage or rent debt relief to veterans in need.  For more details on the organization, go to www.rallyeforvets.org

To become a Co-op member, it’s a simple click away  JOIN TODAY 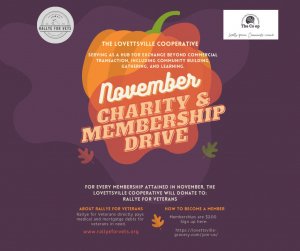 Share the buzz and visit with us on October 16 (Saturday) and 17 (Sunday) from 10:00 a.m. to 4:00 p.m. during the Loudoun Fall Farm Tour.  Potomac Point Apiary will have an observation bee hive and tell you all about the importance of bees as pollinators.  They will have honey for sale too.  We will have giveaway goodies while they last, kids activities, tour maps and a special present for folks becoming new Co-op members.  A local artist and printmaker has donated 3 original linocut prints to be given to the first 3 new Co-op members signing up this weekend during the tour.

Our mascot, Sweet Pea, will also be there to greet the kids and welcomes photo ops!

Our tent will be set up on the Lovettsville Town Commons site across from the Town Square.  See you there!

Stop by and visit with our Membership Committee at Back Street Brews in Lovettsville on Saturday, June 5, 2021, from 1:00 – 3:00 p.m. and enjoy an ice cream cone on us.  We will have a casual meet and greet table to share information on our store status, membership and our Capital Campaign.  Free ice cream until our gift card runs out or 3:00 p.m. whichever comes first!

Seasonal Markets were a success, but now we are working full-time on the plans and funding to open our full-service grocery store.

However, we have an abundance of local farmers and producers providing quality produce, meats, and more. Whether through a CSA, online orders or local farm stores, great food is still available.  For direct links go to our Local Producers page.

Thank you for your understanding and continued support, and please stay safe and healthy. Watch for our store updates and, if you aren’t a member, please become one now. We need you and the community support to open our bricks and mortar store!

Our annual meeting was virtual this year and we apologize for the inconvenience that may have caused.  Much progress has been made over the past year!  So, we have two videos prepared for you if you were unable to attend, or if you want to review the details again.  Part I is Chair John DeSaix’s presentation including accomplishments to date, the move to Lovettsville Square South, store opening timeline, and the importance of our Capital Campaign.  Part II features Gary Large, President of Eco Developers, and a dedicated partner with us in this amazing project that will incorporate sustainable practices.  Then, Ben Sandel of Columinate, a national consulting firm providing guidance to start up cooperatives across the country, speaks to the importance of capital campaigns for all cooperatives and discusses how our Capital Campaign goals are very realistic.

We hope that you will be inspired to participate in our Capital Campaign if you are currently a member.  If you are not a member – What are you waiting for?!

Gary and his wife Colleen moved to Waterford in 2016 and his sons live in Frederick, Maryland. After graduating from Virginia Tech, Gary worked in commercial construction in the DC area.  His development career began in 1986 working on a 68acre Research & Development park in Frederick, MD.  In 1991 he started his own firm and has been developing commercial real estate throughout Maryland and Northern Virginia ever since.  Travelling across the region Gary saw that Loudoun County was the crown jewel of the region and feels very fortunate to now be a part of the community.

Gary’s work on the new Common Market store in Frederick introduced him to the concept of the co-op.  Because the Co-Op is a business based on the commonality and strengths of a local community, Gary and Colleen were eager to join the Lovettsville Cooperative Market and are firm believers that when a community works together they are all safer and stronger.  They appreciate that the Co-Op provides an outlet with enough critical mass to allow local farmers, crafts folk, and vendors, who struggle to sell through chain stores, an opportunity to sell their wares and hopefully make a living wage.  As an added bonus, the Co-Op is an outward expression of the local flavor and personality of the community.

During the renovation of the Common Market Gary said it was a great pleasure and privilege to work with the leaders, staff, consultants, and contractors on the new 50,000 SF facility (28,000 SF of retail floor) in Frederick, MD.  It was several years in the making, during which, despite its size, they remained focused on maintaining the character and purpose of the original store…to bring local suppliers and community together to offer sustainable, organic provisions to local consumers.  The building was an old Safeway store, built in the early 80’s, with no consideration for energy efficiency.  Gary and his team totally gutted and reconstructed the shell with upgraded insulation and windows, and then installed all new energy efficient mechanical, electrical and refrigeration systems.

After years of seeing trainloads of waste roll off construction sites, where buildings were being constructed with minimal emphasis on energy efficiency and sustainability, Gary and his partner Jennifer Perry decided to turn the development business model on its head.  In late 2018 Gary formed the Eco family of companies to provide a full life cycle of development services, from conceptual design to tenant occupancy and property management, with each property pushed to minimize its environmental impact, lower energy demand, and to create pleasurable, safe and healthy work environments.  Gary and his partner work hard to create spaces that invite the community to interact with the properties.  In 2019 they became closely associated with the International Living Future Institute (ILFI) which promotes social justice and inclusion, conscientious use of lands and earth’s resources.  Eco Developers currently has over twelve properties with twenty buildings totaling over 800,000 SF under development.

John DeSaix, Chair of the Lovettsville Cooperative Market, is offering a challenge to our membership. This is an amazing time for our Co-op. Since our announcement of the new grocery store location in October, we have had a steady stream of new members sign on and we want to build on that enthusiasm. So, to make things a little more interesting, he has announced the Chairman’s Challenge!

Current members will have an opportunity to compete for a $50 gift certificate donated by him for some amazing beef, lamb and/or chicken from Donnie Ulmer’s Milcreek Farm in Lovettsville.

CONTEST DETAILS:  All current members are challenged to sign up as many new members as you can between December 1 and December 20, 2020. The current member who signs up the most new members, WINS!  You must be able to pick up your gift certificate near Lovettsville within one week of winning.  We cannot ship certificate nor product.

Send an email to membership@lovettsville-grocery.com when you sign someone up.

Here are some talking points to add to your own when encouraging your friends and neighbors to join:

Please tell your friends to join at www.lovettsville-grocery.com/join-us

The stars have truly aligned to make our locally-grown, community-owned co-op grocery store a reality. Thanks for making this happen!

We are proud to be the new sponsor of the Lovettsville Community Garden. With permission of the Town Council, we have delayed opening due to the COVID-19 crisis and current stay-at-home orders. Very soon, we will be able to enjoy the pleasures of growing our own food, as well as getting much needed outdoor time. Recently, the LCM volunteer team worked to prepare the overall space for the season. We replaced damaged deer fence, refurbished a wrought iron trellis, tilled the soil, cleaned out the shed and organized supplies. In the weeks ahead, we will be painting the shed, installing gutters and adding two rain barrels.

The garden space consists of 9 plots, of which we have already rented 6! Each plot is 10 x 10′ and can be rented for only $10 for the season. We have plans in place for sharing the garden space safely and adhere to town guidelines for social distancing.

Many thanks to Julie Harner for heading up this project. And, kudos to the volunteers who have helped prepare the garden space – Julie and Craig Harner, Mia Harner, Ben Harner, Andy Koch and John DeSaix.

Our winner of the Chili Cook-off Contest was Peter Roebuck-second year in a row with his award winning recipe!

We kicked off the annual meeting last night with our social and Chili tasting contest. It was actually a feast with all the delicious entries, along with veges, home made breads and pies.

Congratulations Peter and hope you enjoy the gift certificate for dinner at Rodeo’s Mexican Grill in Lovettsville!